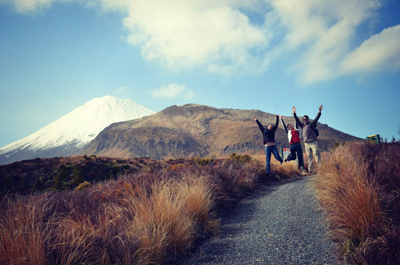 The best one day walk in the world.

This is a full-day 17km hike into a mountain environment, covering steep and often difficult terrain and often subject to severe weather. It is a challenging hike that crosses Mt Tongariro and past numerous volcanic features of the mountain including the stunning volcanic cone of Mt Ngauruhoe.

The Tongariro Alpine Crossing track passes over varied and spectacular volcanic terrain. In the presence of active volcanoes you can experience some of Tongariro National Park’s special gifts. A cold mountain spring, lava flows, an active crater, steam vents, emerald-coloured lakes and magnificent views combine to make this an enjoyable and memorable trip. Some of the main features include the Mangatepopo Valley, which is generally believed to have been carved out by glaciers during the last ice age, and subsequently partially in-filled by lava flows from Ngauruhoe.

Another breathtaking view is of the Emerald Lakes. When descending the northern edge of Red Crater you will come across the three water-filled explosion craters. The minerals leaching from the adjoining thermal area cause their brilliant green colour. The Maori name is Ngarotopounamu meaning greenstone-hued lakes. Despite being surrounded by steam vents called fumaroles, these lakes are very cold and freeze in winter. The Tongariro Northern Circuit track to Oturere Hut branches off to the right at the lowest lake, while the Tongariro Alpine Crossing continues over Central Crater to Blue Lake. The Blue Lake is an old volcanic lava vent with freshwater up to 16 metres deep. Once again, dissolved minerals are responsible for its distinctive colour, and its waters are cold and acidic. This lake is tapu (sacred); therefore you cannot swim in it or eat food around the lake. From Blue Lake the track sidles around the flanks of North Crater, descending to Ketetahi Hut, passin near the Ketetahi Springs, which are on private land. The landowners have given permission for trekkers to cross part of their land but this does not include access to Ketetahi Springs.

Below Ketetahi Hut the track continues down through tussock slopes to the forest bushline. The cool podocarp-hardwood forest provides a final contrast on the long descent to the road-end. At two points the track passes over the tongue of a lava flow from Te Maari Crater and for a distance, travels alongside a stream carrying minerals from Ketetahi Springs.

Ohakune is well serviced by a number of local operators who provide drop-off and pick-up transportation for the Tongariro Alpine Crossing.