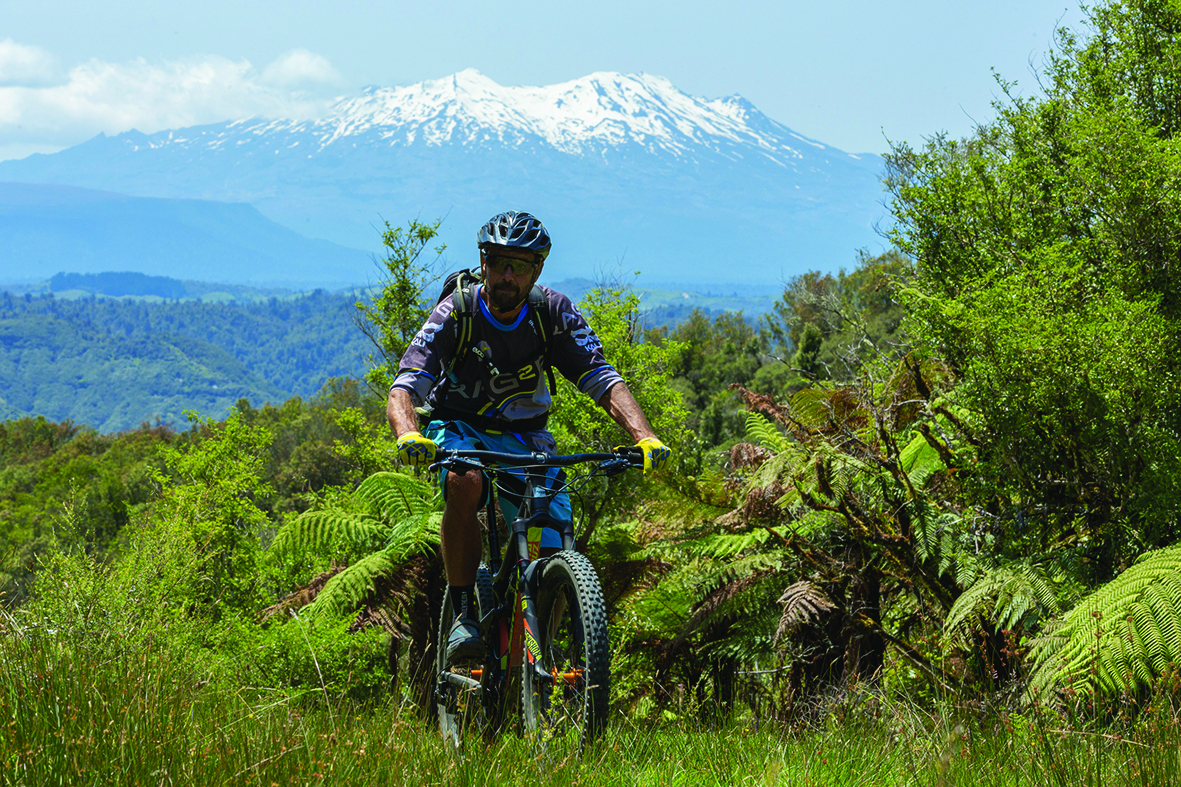 It’s obvious, and readily available on the Ohakune Mountain Road providing a unique cycling experience. If the 16km, 1000-metre climb doesn’t appeal you can take a ride up in a shuttle, then enjoy a thrill-ride downhill all the way. If you prefer to work a bit harder there are numerous tracks around the area, including several in the Rangataua Forest east of Ohakune, or in the Tongariro Forest north of the Park.

Ruapehu mountain biking has received a huge boost in recent years with the development of the Nga Haerenga New Zealand Cycle Trail. Part of this network of tracks is the Mountain to Sea Trail. The Mountains to Sea Trail includes the Ohakune Mountain Road, the Ohakune Old Coach Road, Fishers Track, Oio Road to Whakahoro, the Mangapurua Valley and Whanganui River Road.

Grade 3
Rangataua Road is an old metal forest road of approximately 12 km, located via Karioi Station Road off SH 49) that winds through the picturesque Rangataua Forest on the lower the slopes of Mt Ruapehu. The suggested route is shown on the Ohakune Scenic Trail Loop Map – travel the 4.6km North Track from point J to G returning to Rangataua via Middle Track and the metal track alongside the railway. Both these tracks are single bike trails. West and Middle Track have other users and may be in poor condition when wet.

Grade 2
A mix of a partially-formed paper road and a metal road through typical New Zealand sheep and beef farms and market gardening land, with magnificent views of Mt Ruapehu and Ohakune area. After leaving Lakes Road enter the unformed Ratamarie Road where you go through a typical New Zealand farm (please close gates and respect stock) with great views before finishing on a steepish slope on the metal road.

Grade 1
A pleasant loop road around a lake through picturesque native forest in a DoC reserve a few kilometres out of Ohakune.

Grade 2-3
A new nationally-recognised track rich in history and beauty, to the1908 built Hapuawhenua Viaduct, with an extension to Horopito opened in 2010 as part of the "Mountains to Sea" cycleway. The Old Coach Road is a cobblestone road built to take rail passengers across the gap from the southern railhead at Ohakune to the northern railhead at Raurimu, while the last section of Main Trunk Line was completed.

A testing 16.1km (1000m vertical) climb uphill through various alpine landscapes, starting at the DOC Ranger Station. The Ohakune Mountain Road is the start of the National "Mountains to Sea" cycleway. All sealed road, be prepared for changeable weather conditions.

Grade 4
An Iconic trail of approximately 38 km from Ruatiti Road to the Whanganui River. It forms part of the National "Mountains to Sea " cycleway, upgraded in 2010. The ""Maungapurua Road" turnoff is 30.6km from SH4 along the Ruatiti Road. (14km past Ruatiti Domain). For the most part the track generally follows the Maungapurua Stream – a valley rich in history. In 1917 the Government opened up the valley for returned WWI servicemen. About 15 holdings were developed. Due to economic and financial hardship settlers soon abandoned the area, which was officially closed in May 1942, after three remaining families were ordered out. The famous "Bridge to Nowhere" is 13.6km from the Whanganui River and was constructed in 1935. Bikers can return by the same route or take a jetboat and/or canoe to Pipiriki (20 km) or stop over at the river lodge (11km). More route detail and description is in other publications eg. Kennetts’ Classic New Zealand Mountain Bike Rides or the Mountains to Sea website.

Grade 2
Located 2.8 km along Middle Road from SH 4. A very pleasant ride along an old construction road through native bush of the DoC Conservation Reserve. The track is to the first pylon, there are many other single tracks between pylons to explore.

Grade 2
Starting from the SH4, travel to edge of Plateau and then a 3.4km steep descent down Shorts Hill before following the Orautoha Stream and then the Maunganui-a-te-o River to the Ruatiti Domain where there is a Camping ground, excellent swimming and trout fishing in a delightful riverside setting. Follow road signs to Ruatiti Domain.

Grade 3
Enter via Kapoors Road (18 kms north of National Park), continue 6.4km to carpark, DoC directional sign and start of track. The track should be well marked with dark green posts before and after most major intersections. Considered one of the best mountain bike rides in North Island, it follows old logging tracks through some of the most remote land in New Zealand in State Forest 42 in the Tongariro Forest.

Highlights include the stunning Canyon Valley, several river crossings and a pub at the end. It is around 46 kilometres with overall descent of 520m and takes 4-6 hours. Be prepared and equipped for rapid changeable weather. Obtain further route detail and description from other publications eg. Kennetts’ Classic New Zealand Mountain Bike Rides.

Grade 2
A real busy track of 17km, 95% downhill with a 520m descent. Join metal roads and travel to Monument Corner pick up point. Alternate, but not popular second start point of the national Mountains to Sea cycleway.

Grade 2
Opposite the Old Waikune Prison, 3km south of National Park, is a seal road that leads to an old mill site, through an old forestry area that used to be milled by the prison. Park in Old Mill site. All tracks lead back to site. For best enjoyment, obtain a plan of the tracks. Good for the family.

Grade 2 & 3
Erua and Cuff Road are metalled, through some fascinating and beautiful ecological and forest areas with spectacular views. They are old construction tracks in mixed state – for the adventurous.

Grade 3
A demanding uphill and/or a buzz downhill including the Bruce Road to the Whakapapa Ski Area.

The Marton Sash and Door Tramway Trail starts and finishes at National Park Village and is suitable for the whole family. You'll start by riding next to the main trunk line heading south, before heading west and down towards the Waimarino Stream. You'll see relics of a bygone era, old log bridges, rail irons, huts, dams and tram skidways. You'll also ride through pine plantations including 'The Pines' MTB Park in Waikune Forest, before riding back up the main trunk line to National Park Village.